News Number of HSE Prosecutions Against Directors Triples in 2016
News

Number of HSE Prosecutions Against Directors Triples in 2016 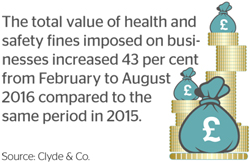 In fact, in 2016, the 20 largest health and safety fines totalled £38.6 million. This is a significant increase, especially when compared to the previous two years, whose 20 largest fines totalled £13.5 million in 2015 and £4.3 million in 2014. The total value of health and safety fines imposed on businesses increased by 43 percent in the six months since the new guidelines were introduced, according to research from the global law firm, Clyde & Co.

These new guidelines place a much higher burden on directors and senior managers for ensuring health and safety in their organisations and make it increasingly likely that they could go to prison for both intentional breaches or a flagrant disregard for their responsibilities.

Avoid these new debilitating fines by conducting a thorough risk management and health and safety review of your premises and policies. In addition, you should solicit the input of your employees, since asking them to identify their health and safety concerns can be invaluable in finding hazards that would not have been obvious to upper-level managers.

Download our guide on how to complete a Health and Safety Risk Assessment for your business.

ContactCIEEM Insurance Services today to ensure that your organisation is protected from potentially crippling fines.