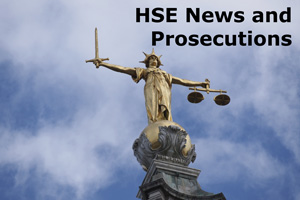 Shell UK received a £60,000 fine after a technician suffered a serious injury from a gas cylinder on an offshore installation. When a technician rolled a cylinder along the floor and removed the protective cap, the trigger mechanism activated, releasing enough pressure to force the technician to drop the cylinder. This caused a valve to shear and become projectile, striking a second technician. Investigation revealed the company failed to take steps to eliminate cylinder risks, remove unsuitable pressurised cylinders in a safe manner and provide employees with appropriate training.

Thistlemoor Healthcare and Management Limited was fined £15,000 and ordered to pay costs of £1,805.60 after failing to carry out asbestos surveys on multiple accounts. The company performed construction work on two properties, both of which were likely to contain asbestos, without conducting a survey. Further investigation found the company’s construction work on the properties likely disturbed asbestos-containing materials. For more information about working safely with asbestos, click here.

A North Yorkshire company was fined £32,000 and ordered to pay costs of £2,424.60 after a worker suffered multiple broken bones following a fall from height. The worker was attempting to work from a ladder, but fell a distance of about 2 metres while working on the roof. An investigation revealed the company failed to properly plan the necessary work at height or provide suitable equipment.