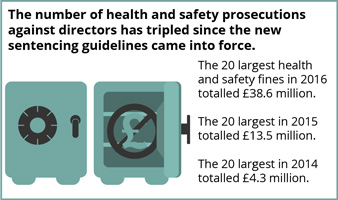 In fact, after new guidelines from the Sentencing Council came into force in February 2016, the number of health and safety prosecutions against directors and officers tripled. What’s more, the value of the 20 highest fines in 2016 totalled £38.5 million, which was just slightly more than all 660 successful prosecutions in 2015-16.

In addition to stricter legislation, the emergence of new risks—such as cyber breaches—has heightened the circumstances surrounding boardroom decisions.

With good cause, as cyber attacks in 2016 hit each UK business 230,000 times. As a result, 73 per cent of directors and officers are regularly discussing their organisations’ cyber security policies, according to a recent industry survey.

Unfortunately, despite the increased awareness about the potential cyber dangers, only 57 per cent of all UK organisations have taken action to identify and prevent cyber security risks. Failing to take necessary measures on cyber threats could make you and your fellow senior directors liable for fines and prosecutions based on your directors’ and officers’ responsibility to prioritise cyber defence.

To help ensure that your organisation’s directors and officers are complying with government legislation and protecting against cyber threats, consider adopting the following best practices: